The Apostle Peter (allegedly) said the following to a large crowd in Jerusalem on Pentecost, responding to the accusation by some in the crowd that the reason that the disciples were speaking in (foreign) tongues was because they were drunk:

But Peter, standing with the eleven, raised his voice and addressed them, “Men of Judea and all who live in Jerusalem, let this be known to you, and listen to what I say. 15 Indeed, these are not drunk, as you suppose, for it is only nine o’clock in the morning. 16 No, this is what was spoken through the prophet Joel:

‘In the last days it will be, God declares,
that I will pour out my Spirit upon all flesh,
and your sons and your daughters shall prophesy,
and your young men shall see visions,
and your old men shall dream dreams.
18 Even upon my slaves, both men and women,
in those days I will pour out my Spirit;
and they shall prophesy.
19 And I will show portents in the heaven above
and signs on the earth below,
blood, and fire, and smoky mist.
20 The sun shall be turned to darkness
and the moon to blood,
before the coming of the Lord’s great and glorious day.
21 Then everyone who calls on the name of the Lord shall be saved.” 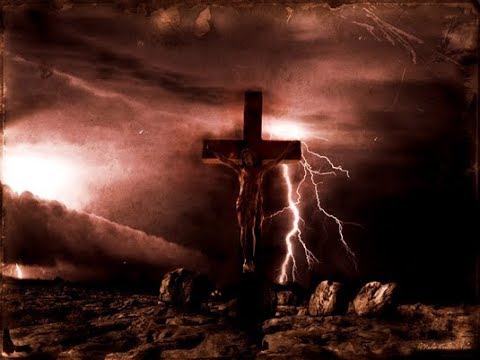 Gary:  The sun turned to darkness and the moon turned to blood on the day of the crucifixion???  Really?

If you do a google search on this topic you will see that most conservative Christian apologists do not believe that the moon turned into blood on the day of Jesus’ crucifixion.  They claim that since Peter was quoting the prophet Joel, this is simply “apocalyptic” language.   However, most of these same conservative Christian apologists do believe that there was a real earthquake, a real renting of stones, a real renting of the Temple veil, and a real three hours of darkness over the entire earth (or at least over the Jerusalem area).  They believe so strongly that these latter events were real that they have scoured the texts of Antiquity looking for any hint which supports their historicity.

But seriously folks, an eclipse or other means of blotting out the sun for three hours is just as unprecedented as the moon turning to blood.  Why attempt to prove the historicity of one of these unheard of events but write off the other as symbolic simply because the latter is slightly more fantastical?  Let’s accept the obvious:  the Gospels authors were using fantastical literary symbolism to emphasize to their readers the earth-shattering importance of the death of Jesus.  They weren’t being literal.  But neither were they attempting to lie or deceive anyone.  Modern readers forget that the Gospels were not written for mass publication to a general audience.  The educated patrons for whom these books were written would have understood and found completely appropriate the use of symbolic fiction in any Greco-Roman biography.

So let’s enjoy the beautiful imagery of these ancient texts and stop insisting they every detail within them describes a literal historical event.  Jesus was crucified.  He died.  He was probably buried somewhere in some fashion.  And shortly after his death, some of his followers had “appearance experiences” of some nature.  That’s all we can say for sure.

The rest is great literature.  We will never know if any of the other events described in these stories really happened.

As I noted in the beginning of my analysis, there have been few attempts to claim that on Pentecost the moon actually turned to blood, while there have been many attempts to  treat the Matthean eschatological signs (earthquake, darkness, rent rocks, opening of graves) as historical.  …These phenomena represent a theological interpretation of the import of Jesus’ death, an interpretation in the language and imagery of apocalyptic.  To make a matter of major concern their historicity is to fail to understand their nature as symbols and the literary genre in which they are presented.  A comparable example would be for readers ca. AD 4000 to debate the literal historicity of George Orwell’s book 1984.

…apocalyptic imagery was in many ways a more effective medium for communicating such truths that lie beyond ordinary experience than would have been discursive disquisition.  Apocalypticists, with all their vivid images, still write within the limiting sphere of human approximation; they betray an awareness that they have not exhausted the wealth of the otherworldly—an awareness that a more precise and prosaic exposition sometimes obscures.

Gary:  Very insightful.  But can’t we go one step further?  Isn’t it just as possible that the detailed fantastical Appearance Stories in Matthew, Luke, and John, which are completely absent from Mark and the writings of Paul, were never meant to be understood literally either?  They were included in the stories for poetic imagery.  They are symbolic, not literal.  They are fictitious imagery of what the authors imagined the earliest Christians thought they had seen when they experienced visions, vivid dreams, illusions, trances, hallucinations, and/or false sightings of a “risen” Jesus???

23 thoughts on “Did the Moon Turn to Blood during the Crucifixion?”