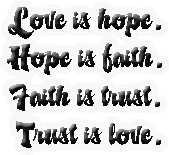 Christian theologians wouldn’t ask you to believe “by faith” as you are using the term.  The Bible actually commands us to give you reasons to believe…not just call you to believe (see 2 Peter 3:15).  So asking people to believe the claim “by faith” in the way you are using the term would be un-biblical.  Remember that the meaning of the term “faith” in Christian theology is simply “trust”.  If one trusts God then one can be said to have “faith” in God.  So it is sort of an odd usage of the term to talk about believing by “faith” in the way you seem to be using it.

Thanks for the response.

Good. So your definition of faith is “trust”. That is good to know because not all Christians define faith in the same way.

Jesus, if correctly quoted, encouraged people to trust (have faith in) the supernatural claims he was making about himself with the maturity of a small child. Small children do not use reason and logic to evaluate truth claims. Small children accept as truth whatever their authority figures tell them. They do not conduct research on the evidence to verify the accuracy of the claims. Asking educated adults to believe very unusual claims based on “trust” in one’s word violates the principles of critical thinking. It is not rational.

Extremely unusual, outlandish claims, regardless of who is making them, should be viewed with skepticism until substantial evidence is presented to support the claim. Simply taking Jesus’ word (or that of any other “teacher”) is foolish.

Jesus also (allegedly) once said this: “Jesus said to him, “Have you believed because you have seen me? Blessed are those who have not seen and yet have come to believe.” Here, Jesus is praising and promoting belief in dead body re-animations/transformations (resurrections)– based on hearsay. Again, that is a violation of critical thinking skills.

Christians have little if any objective evidence for their core belief—the bodily resurrection of Jesus. This claim is primarily based on alleged eyewitness testimony contained in four alleged eyewitness sources, but the fact is that this claim is heavily disputed among historians. Many historians and scholars, including the Catholic Church, doubt the eyewitness authorship of the Gospels.

I would suggest that the primary evidence for many evangelicals, including Dr. Craig, is the “still, small voice” in their heads, as I mentioned in my first comment to Dr. Craig. The problem with this “evidence” is that evangelical Christians cannot prove to anyone that this “voice” is anyone other than themselves…their inner monologue.

Trust in your doctor, lawyer, general contractor, etc. is supported by substantial, verifiable evidence of their expertise and accuracy in decision making (licenses, board certifications, reviews, etc..).  That is very different from the faith/trust Christians profess in Jesus.

Christians may have questionable eyewitness claims that a few people saw Jesus alive again after his death, but they have zero evidence that Jesus is still alive and ruler of the universe—other than their subjective perceptions of him living in their “heart”.

That is not trust, that is wishful thinking.

3 thoughts on “Dear Christian: Trust and Faith are NOT the Same Thing!”