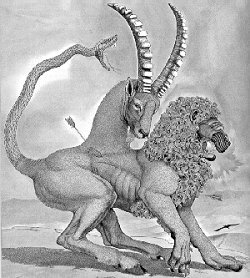 This book is mainly about evolution as the solution of the the complex ‘design’ problem; evolution as the true explanation for the phenomena that [eighteenth century theologian] William Paley thought proved the existence of a divine watchmaker.  This is why I keep going on about the eyes and echolocation.  But there is another whole range of things that the theory of evolution explains.  These are the phenomena of diversity:  the pattern of different animal and plant types distributed around the world, and the distribution of characteristics among them.  Although I am mainly concerned with the eyes and other pieces of complex machinery, I musn’t neglect this other aspect of evolution’s role in helping us to understand nature.  So this chapter is about taxonomy [the science of classification].

At this point I cannot resist drawing attention to the irony in the challenge that creationists are fond of hurling at evolutionists:

“Produce your intermediates!  If evolution were true, there should be animals that are half way between a cat and a dog, or between a frog and an elephant.  But has anyone ever seen a frelephant?”

I have been sent creationist pamphlets that attempt to ridicule evolution with drawings of grotesque chimeras, horse hindquarters grafted to a dog’s front end, for instance.  The authors seem to imagine that evolutionists should expect such intermediate animals to exist.  This not only misses the point, it is the precise antithesis of the point.  One of the strongest expectations the theory of evolution gives us is that intermediates of this kind should not exist.

No librarian can entirely avoid the problem of intermediates or overlaps [when organizing books into categories in a library].  There is no single, unique, correct solution to the problem of how the books of the library or a bookshop should be classified.  …The taxonomy [classification] of living creatures, on the other hand, does not have this problem.

…If we write the names of any set of animals on a large sheet of paper and draw rings around related sets, rat and mouse would be united in a small ring indicating that they are close cousins, with a recent common ancestor.  Guinea pig and capybara would be united with with each other in another small ring.  The rate/mouse ring and the guinea-pig/capybara ring would, in turn, be united with each other (and beavers and porcupines and squirrels and lots of other animals) in a large ring labelled with its own name, rodents.  Inner rings are said to be ‘nested’ inside larger, outer rings.  Somewhere else on the paper, lion and tiger would be united with one another in a small ring.  this ring would be included with others in a ring labelled cats.  Cats, dogs, weasels, bears, etc. would all be united, in a series of rings within rings, in a single large ring labelled carnivores.  The rodent ring and the carnivore ring would then take part in a more global series of rings within rings in a very large ring labelled mammals.

The important thing about this system of rings within rings is that it is perfectly nested.  Never, not one single solitary occasion, will the rings that we draw intersect each other. [There are no intermediates!]  Take any two overlapping rings, and it will always be true to say that one lies wholly inside the other.  The area enclosed by the inner one is always totally enclosed by the outer one:  there are never any partial overlaps.  This property of perfect taxonomic nesting is not exhibited by books, languages, soil types, or schools of thought in philosophy.  If a librarian draws a ring round the biology books and another ring round the theology books, he will find that the two rings overlap.  In the zone of overlap are books with titles like “Biology and Christian Belief”.

In the taxonomy [classification] of living creatures these problems do not arise.  There are no ‘miscellaneous’ animals.  As long as we stay above the level of species, and as long as we study only modern animals (or animals in any given time slice: see below) there are no awkward intermediates.  …[For instance,] whales are mammals and not fish, and they are not, even to a tiny degree, intermediate.  They are no closer to fish than humans are, or duck-billed platypuses, or any other mammals.

…The moment we start to consider extinct animals, it is no longer true that there are no intermediates.  On the contrary, we now have to contend with potentially continuous series of intermediates.