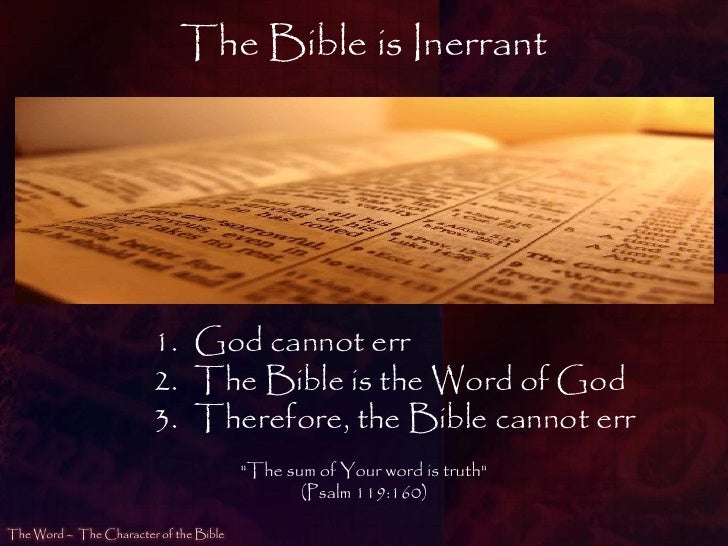 From a discussion on Bart Ehrman’s blog:

“Inerrant” means without error. So, a simple way of explaining what it means to say the Bible is inerrant is to assert that it contains no errors of any kind. One can imagine a preacher holding up his Bible during his Sunday morning sermon and saying, “This is God’s inerrant Word. Every word in it’s true!” For that, the argument is given, “If the Bible is divinely inspired, it must be inerrant, since God cannot err.” However, as I noted in my previous post, that argument only works if either (a) God dictated the words to the biblical writers who acted merely as scribes or (b) God, in a manner unknown to us, used their personalities and various writing styles to pen every word as He desired. As we observed, neither are likely, given the Bible that we have.

If by divine inspiration we mean that God actuated circumstances whereby the authors of the biblical literature wrote what they did using their own words, arguments, and logic, and that God ultimately approved what they wrote, despite the presence of human imperfections, then the doctrine of biblical inerrancy may be understood in a number of ways.

…Perhaps the definition most commonly accepted by evangelicals around the world is found in the Lausanne Covenant (1974) of which the British theologian John Stott was its chief architect. It was signed by nearly 3,000 evangelical leaders. Pertaining to the Bible it reads, “We affirm the divine inspiration, truthfulness and authority of both Old and New Testament Scriptures in their entirety as the only written word of God, without error in all that it affirms [emphasis mine], and the only infallible rule of faith and practice.”

…I prefer to define “inerrancy” as follows: The Bible is true, trustworthy, and without error in all that it teaches and to the extent that God intended. When I define “inerrant” in this manner, I am referring to both the autographs and our present Bible.

How do you know that any of the books of the NT are the inspired, inerrant, Word of God? Some of these books, such as II Peter, were not accepted into the canon until several hundreds years after Jesus’ death. Even if you were to believe that every book in the canon was accepted in the first century by all the churches established by Paul and the Twelve what authority does that give to these books as the “inspired, inerrant Word of God”?  Jesus did not certify any of these books. What divine authority do churches have? None, if you are a Protestant.   And how do we know that the apostle Paul was truly speaking for God and not for himself? Maybe he was mentally unstable. You have zero evidence that Paul was speaking for God or that his epistles are the Word of God other than appealing to II Peter, which again, was a disputed book. The evidence for the canon of the New Testament as the inspired, inerrant Word of God is extremely weak. It is a matter of faith (wishful thinking).

Gary:  Dr. Licona: Which takes precedence in your worldview: historical evidence or the testimony of the Holy Spirit in your heart?

Mike Licona:  That’s a fair question, Gary. If I could clearly identify the testimony of the Holy Spirit in my heart, that would take precedence. Because I cannot, historical evidence plays a very large part in my assessments about the past.

Gary:  Fair answer. However, can you see why many skeptics doubt your ability to be objective, Dr. Licona, when you give at least some credence to a “still, small voice” inside your head regarding universal truth claims, including historical claims such as the alleged bodily resurrection of Jesus? If I were to debate you on the historicity of Caesar’s crossing of the Rubicon, we both would debate historical evidence alone. Neither one of us would appeal to an inner voice as additional evidence for our belief (at least I hope not). So how can you claim to have objectively evaluated the evidence for the resurrection of Jesus and the inspiration of the Bible when your belief on these issues is, at least in part, based on an inner voice?

Mike Licona:   Gary, I think you’re projecting stereotypes onto me. I did not speak of a small voice inside. The fact that I’m willing to trust my historical inquiry above a small voice should suggest to you that I’m trying to manage my biases while conducting my inquiries. If you read my book “The Resurrection of Jesus: A New Historiographic Approach,” you’ll see what steps I took to place my biases in check during my investigation.

Every one of us has biases, whether we recognize them or not. And we are influenced by many things. Blaise Pascal wrote, “People almost invariably arrive at their beliefs not on the basis of proof but on the basis of what they find attractive.” Our desire to discover and follow truth wherever it leads is something many claim but few actually live out. Those who know me well are aware of the extent to which I wrestled with my own objectivity or lack of it going into my investigation. And they are aware of how I dealt with it throughout my investigation.