So conservative Christians must ask themselves this question:  If the evidence for the eyewitness/associate of eyewitness authorship of the Gospels is good, why do so many scholars who do not have a bias against the supernatural doubt or reject it?  Let’s see what the Catholic Church says about the next Gospel in the New Testament, the Gospel of Luke: 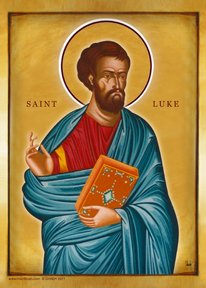 The Gospel According to Luke:

Early Christian tradition, from the late second century on, identifies the author of this gospel and of the Acts of the Apostles as Luke, a Syrian from Antioch, who is mentioned in the New Testament in Col 4:14, Phlm 24 and 2 Tm 4:11. The prologue of the gospel makes it clear that Luke is not part of the first generation of Christian disciples but is himself dependent upon the traditions he received from those who were eyewitnesses and ministers of the word (Lk 1:2). His two-volume work marks him as someone who was highly literate both in the Old Testament traditions according to the Greek versions and in Hellenistic Greek writings.

Among the likely sources for the composition of this gospel (Lk 1:3) were the Gospel of Mark, a written collection of sayings of Jesus known also to the author of the Gospel of Matthew (Q; see Introduction to Matthew), and other special traditions that were used by Luke alone among the gospel writers. Some hold that Luke used Mark only as a complementary source for rounding out the material he took from other traditions. Because of its dependence on the Gospel of Mark and because details in Luke’s Gospel (Lk 13:35a; 19:43–44; 21:20; 23:28–31) imply that the author was acquainted with the destruction of the city of Jerusalem by the Romans in A.D. 70, the Gospel of Luke is dated by most scholars after that date; many propose A.D. 80–90 as the time of composition.

Next post:  The Catholic Church on the authorship of the Gospel of John

One thought on “Does the Catholic Church Believe that the Gospels were Written by Eyewitnesses? Part 3”