Immediately after Jesus’ arrest in Jerusalem, his male disciples fled home to Galilee.  Only a few women followers stayed behind in the city.  These women found the Empty Tomb on Sunday morning following Jesus’ execution and burial.  They believed that someone had stolen or moved the body.  They fled the scene terrified.  They returned to Galilee and told the male disciples what had happened.

This idea sparked a glimmer of hope in the grieving, despondent disciples.  Maybe they would reign with Jesus in the New Kingdom after all!  This glimmer of hope quickly fanned the flames of religious superstition and created an atmosphere of emotional hysteria.

Disciples started seeing Jesus in their dreams (visions), in their day dreams (trances), and in false sightings of someone who looked like Jesus in large crowds, or in illusions of natural phenomena.

One day, hundreds of Jesus’ followers gathered on a mountain in Galilee, a few hundred yards from the summit.  It was a cloudy day.  Fog enveloped the top of the mountain.  The disciples began to pray.  They prayed that if Jesus had been raised from the dead, that he would appear to them.

Suddenly they looked up at the summit of the mountain.  The fog had lifted and there was a man.  He was looking down at them.  He looked…he looked like JESUS!  Jesus had heard their prayers and had appeared to them!  The man smiled at the crowd of people looking up at him and waved.  His wave was unusual. It was a movement of the outstretched arm and hand from top to bottom, then a slow sweeping movement of the arm and hand from left to right.

[Or, the man made some other gesture which the disciples interpreted as unique to Jesus.]

In the next second, the fog enveloped the summit again and the disciples could no longer see the man.  Some of them ran to the summit to take hold of Jesus, but could not find him in the thick fog.  After a half hour, the fog at the summit lifted, and the man was nowhere to be seen in the entire area.

“Jesus has appeared to over 500 of his followers and now God has taken him to heaven, just like Elijah!!!”

The stories of the appearance of Jesus to the Five Hundred and the Ascension were born.

(The man on the mountain top was a shepherd looking for his sheep in the fog.  Yes, he looked like Jesus, but he was not Jesus.) 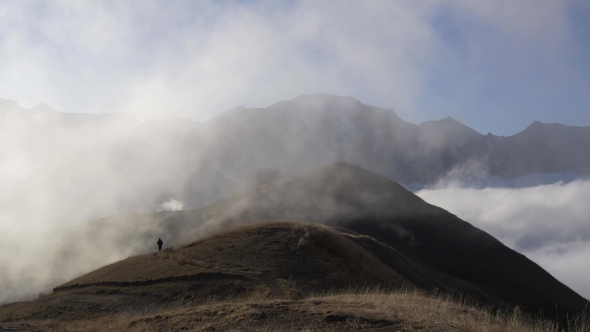 20 thoughts on “The Appearance to the Five Hundred and the Ascension were the Same Event!”