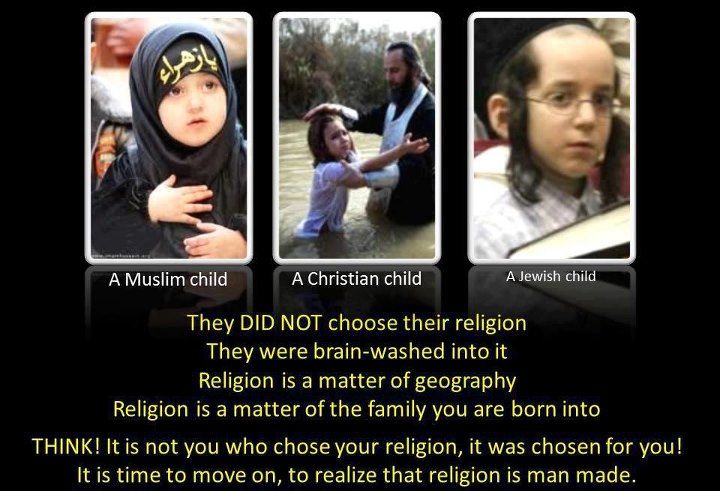 The overwhelming majority of religious people in the world “chose” their religious belief system when they were children.  How much evidence did these children review before believing some of the most fantastical claims imaginable (flying horses, resurrected corpses, an invisible being speaking from the top of a mountain to three million people below)?  Not much, if any, I suspect.

I will even bet that the overwhelming majority of evangelical Christians first believed the fantastical claims of the Christian Bible as young children or in their early teens.  Initially, religious faith, by and large, is not based on evidence but on other subjective factors, most importantly, the faith beliefs of our parents.  So once we believed these fantastical claims as children, the veracity of these beliefs was then ingrained into us by our parents, our pastors/priests, our Sunday School teachers, and our family’s circle of “church friends”.  Even our culture at large validates the core Christian teachings as respectable.  So, before most Christians ever examined the evidence, their religious beliefs were already a core part of who they are.

Once we decide something is true (for whatever reason), we often make up reasons for believing it.

“According to conclusive scientific studies, we have a very strong tendency to believe what we prefer to believe and to confirm what we believe, depending on how strong our beliefs are and how much commitment we have in maintaining them.  This has been demonstrated time and time again by psychological studies.  Once our minds are made up it is very hard to change them.  We seek to justify our decisions, especially the ones that are costly in terms of commitment, money, effort, time, and inconvenience.

Almost shockingly, these studies have shown us that reading information that goes against our point of view can actually make us convinced we are right.  We will even take a lack of evidence as evidence for what we accept as the truth.  Social psychologists Carol Tavris and Elliot Aronson document these types of phenomena in their book Mistakes were Made (but Not by Me):  Why We Justify Foolish Beliefs, Bad Decisions, and Hurtful Acts.  They tell us, “Most people, when directly confronted with proof that they are wrong, do not change their point of view or course of action but justify it even more tenaciously.” ”

Gary:  Is this why conversations with very devout, very committed Christians regarding the evidence for their beliefs seem to be such a complete waste of time?  The more evidence given against their beliefs, the more these Christians dig in to defend them.

Take the issue of the authorship of the Gospels.  There is very good evidence that the majority of New Testament scholars do not believe in the eyewitness authorship of the Gospels.  When presented with this evidence, many very committed conservative Christians will refuse to accept it, or if they do, will assert that the majority of scholars are biased.  Yet, these same committed conservative Christians will appeal to this same majority of scholars to support their beliefs that Jesus was a real historical person and that his empty tomb is an historical fact!

In addition to overwhelming majority consensus on this issue, committed conservative Christians must also explain why even the majority of Roman Catholic scholars do not believe in the eyewitness authorship of the Gospels.  What bias would Roman Catholics have to take such a position?  But again, this evidence is dismissed.  These devout committed Christians persist in their belief that the Gospels were written by eyewitness or the close associates of eyewitnesses.  “We can be absolutely certain of the reliability of the Gospels!” is their mantra.  Why is this position so very important to them?  Answer:  Without eyewitness testimony, the strength of the evidence for the central claim of traditional Christianity, the bodily resurrection of Jesus of Nazareth, becomes very shaky indeed.  To admit that the evidence for this fantastical, never-heard-of-before-or-since event is weak would be devastating for their entire worldview!  Their entire worldview, personal identity, personal relationships, and social life are dependent on the historicity of this event.  Without it, their world collapses!

Evidence may convince a “nominal” Christian of the error of his worldview, but rarely the indoctrinated Christian.  The above research tells us why.

10 thoughts on “If Evidence Fails to Persuade Most Christians of the Improbability of their Supernatural Beliefs, What Will?”