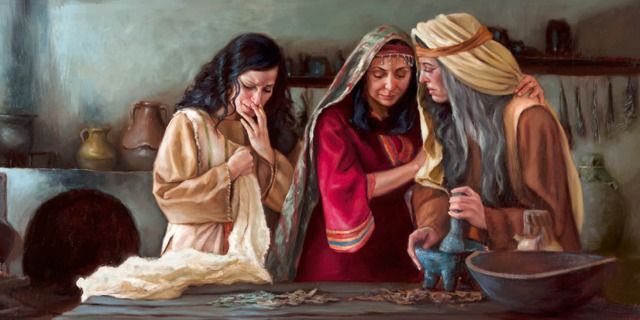 When the Sabbath was over, Mary Magdalene, Mary the mother of James, and Salome bought spices so that they might go to anoint Jesus’ body.

This man [Joseph of Arimathea] went to Pilate and asked for the body of Jesus. … It was the day of Preparation, and the sabbath was beginning.[o]55 The women who had come with him from Galilee followed, and they saw the tomb and how his body was laid. 56 Then they returned, and prepared spices and ointments.  On the sabbath they rested according to the commandment.

Beyond this contradiction, think about this:  If Joseph and Nicodemus applied 100 pounds of spices to Jesus’ body as John states (four pounds more than applied to the body of King Herod the Great!), and Mark’s women followed Joseph (and Nicodemus”) to the tomb as Mark indicates, why would Mark and Luke’s women prepare even more spices?  In addition, how did Mark and Luke’s women expect to get into Matthew’s sealed tomb, guarded by Matthew’s Roman soldiers???

These stories are not harmonizable.

Neither eyewitnesses nor the associates of eyewitness wrote these four stories, my friends!

41 thoughts on “Gospel Contradictions: When Did the Women Buy Spices For Jesus’ Burial?”