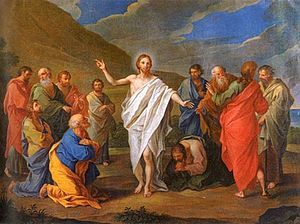 As they entered the tomb, they saw a young man, dressed in a white robe, sitting on the right side; and they were alarmed. 6 But he said to them, “Do not be alarmed; you are looking for Jesus of Nazareth, who was crucified. He has been raised; he is not here. Look, there is the place they laid him. 7 But go, tell his disciples and Peter that he is going ahead of you to Galilee; there you will see him, just as he told you.” 8 So they went out and fled from the tomb, for terror and amazement had seized them; and they said nothing to anyone, for they were afraid

There is a growing  consensus of scholars that Mark 16:7 was a redactional addition to the story of the empty tomb, intended to leave open the possibility of combining the tradition of the empty tomb with the tradition of appearances.  …Mark’s Gospel (if, as I suspect, there was no “lost ending”) represents a stage in the development of the empty tomb story where, as yet, no appearance narratives have been appended, even though the reader is presumed to know of the appearances.  In the other three Gospels appearance narratives have been incorporated , and ultimately an unknown scribe brought Mark’s Gospel into line by his addition of the Marcan Appendix [the long ending of Mark] which lists a series of appearances.

—The Virginal Conception and Bodily Resurrection of Jesus, p. 123