From noon on, darkness came over the whole land[p] until three in the afternoon. 46 And about three o’clock Jesus cried with a loud voice, “Eli, Eli, lema sabachthani?” that is, “My God, my God, why have you forsaken me?” 47 When some of the bystanders heard it, they said, “This man is calling for Elijah.” 48 At once one of them ran and got a sponge, filled it with sour wine, put it on a stick, and gave it to him to drink. 49 But the others said, “Wait, let us see whether Elijah will come to save him.”[q] 50 Then Jesus cried again with a loud voice and breathed his last. 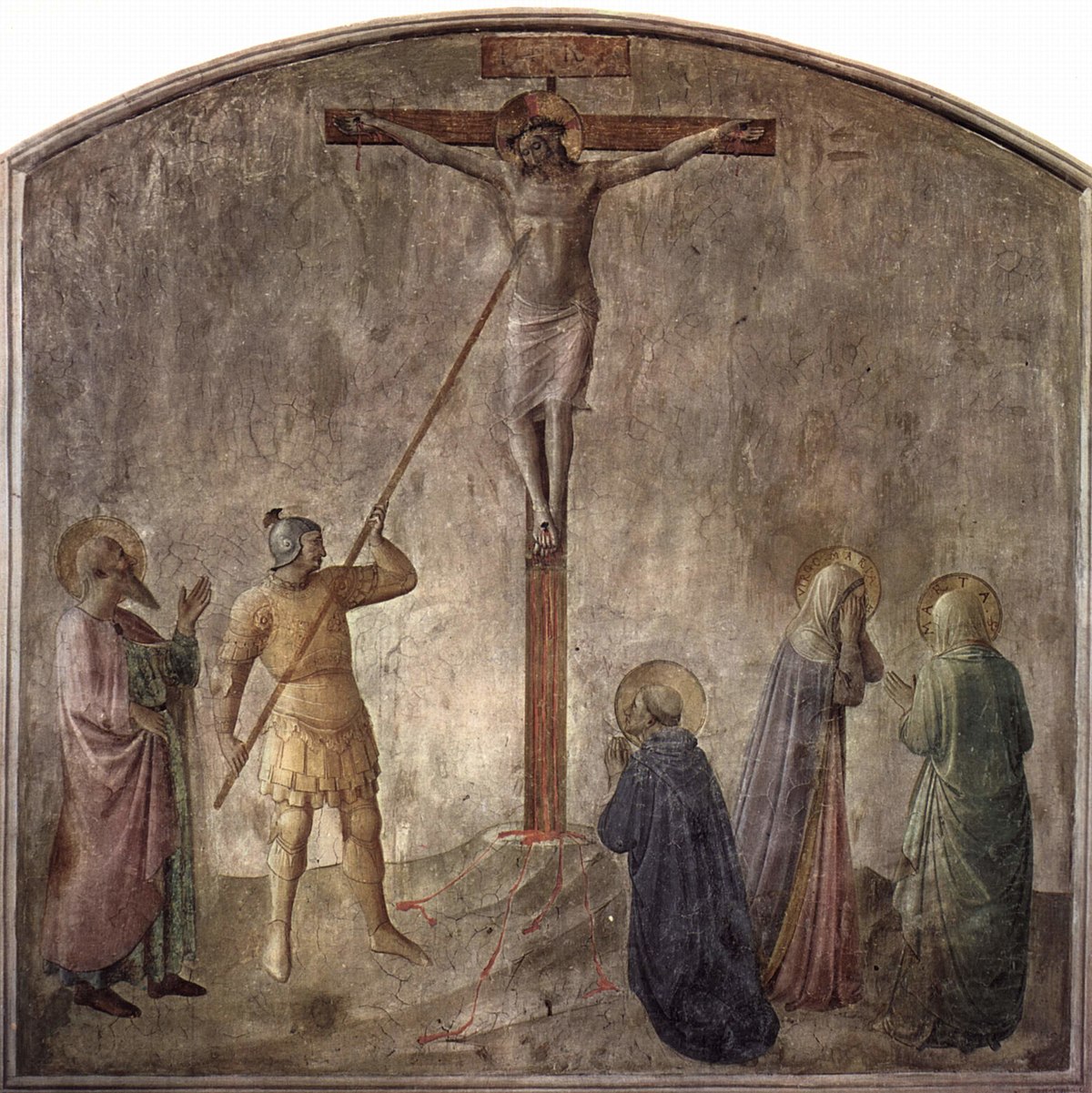 [There is] an additional line at the end of Matthew 27:49 found in some important textual witnesses (Codices Vaticanus and Sinaiticus, the Irish-British family of Latin manuscripts, Harclean Syriac, and Chrysostom):

“But another, having taken a lance, stabbed at his side, and there came out water and blood.”

It would lead into 27:50, where Jesus shouts out with a loud cry and expires.

[New Testament scholar) Pennells thinks that embarrassment at the picture of Jesus shouting when he was stabbed and dying of a spear wound led to suppression of the passage or its transfer to after Jesus’ death, as in John 19:34.  Most textual critics, however, have judged that it was an erudite Alexandrian addition to Matthew copied from John 19:34 (with which it shares ten words out of thirteen):

“One of the soldiers stabbed his side with a lance, and immediately there came out blood and water.”

Presumably the Johannine passage was copied into the margin of a manuscript of Matthew and then subsequently introduced into the text, even though it is not totally clear why a copyist introducing a Johannine vignette into Matthew would have moved this episode from after the death of Jesus, where John had it, to before the death.

…While there is little chance that the addendum was originally part of Matthew, its very existence in manuscripts of Matthew is a testimony to how early Christians harmonized the Gospel accounts of the Passion Narrative.

Gary:  To me, this is a big deal.  I would be a rich man if I had a dollar for every time that a conservative Christian has told me that the early Christians strictly maintained the integrity of their oral and written traditions; a custom they inherited from Jews who memorized their Scriptures word for word.  The evidence above demonstrates that early Christians, at least by the second century, were keenly aware of the existence of contradictions and theologically embarrassing statements in the four Passion Narratives of the four Gospels and they therefore attempted to “doctor” these texts to resolve those differences.

And if there is good evidence that second century Christians were doctoring the “Jesus Story” how do we know that the first century original authors of the four Gospels didn’t do they same when writing their versions of the Jesus Story???  For all we know, the author of Mark invented The Empty Tomb Story.  The authors of Luke and Matthew copied Mark’s Empty Tomb Story but added their own vignettes to it, such as the Detailed Appearance Stories (seemly unaware of the other’s appearance claims as Luke’s appearances to the male disciples are all in the environs of Jerusalem but Matthew’s are all in Galilee!), and the author of John added details which have no corollary in any of the Synoptics!

Dear conservative Christian:  Exactly which details in the Jesus Story can we trust to be true???

2 thoughts on “Evidence of Early Christians Doctoring the Gospels: When was the Lance Thrust in Jesus’ Side?”