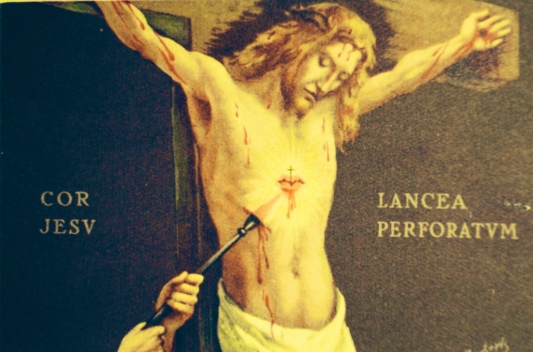 Instead, one of the soldiers pierced his side with a spear, and at once blood and water came out.

As a physician, this passage of the Gospel of John has always made me scratch my head, even when I was still a Christian.  What possible physiological process could have occurred to make a bystander think that blood and water had flowed out of Jesus pierced side?  I have heard all kinds of attempted explanations but none of them make any sense to me.

One of the most common proposed explanations is that the soldier’s spear lanced the pericardial sac covering Jesus’ heart.  The pericardial sac is a thin membrane that covers the surface of the heart.  Under certain conditions, fluid can build up between the heart and the sac.

That’s why both I and mainstream NT scholar Raymond Brown suggest that we not take this Bible passage literally.  The authors of the Gospels were writing works of theology, not modern history textbooks (or medical textbooks) which demand a very high standard of accuracy.

In my judgement the major defect of most of the [medical] studies [regarding the medical cause of Jesus’ death] I have reported on [above] thus far is that they were written by doctors who did not stick to their trade and [who] let a literalist understanding of the Gospel accounts influence their judgments on the physical cause of the death of Jesus.  There is no evidence that the evangelists personally knew anything about that matter, and discussion of it could better be carried on simply by employing the best of medical knowledge to determine how any crucified person is likely to have died (and not citing a single biblical detail in confirmation).

[Attorneys, law professors, and others] skilled in Law have produced many studies of the trial of Jesus with the assumption that from their professions they could shed light on the legalities of the proceedings.  Often they wrote without any awareness that the NT records could not be treated as if they were exact court records.  It is not surprising that many of those skilled in medicine have written to explain the cause of Jesus’ death using the gospel accounts as if the details preserved therein were exact observations that made a diagnosis possible….Often the medical writers have expressed their conclusions without recognizing that any or all these features might embody theological symbolism rather than historical description.

Gary:  Just more evidence that the anonymous authors of the four Gospels frequently indulged in fiction to produce marvelous works of theological literature!  Modern readers of the Bible need to stop reading it as if it were a history book.

3 thoughts on “Blood and Water Literally Came Out of Jesus’ Pierced Side? I Highly Doubt It.”