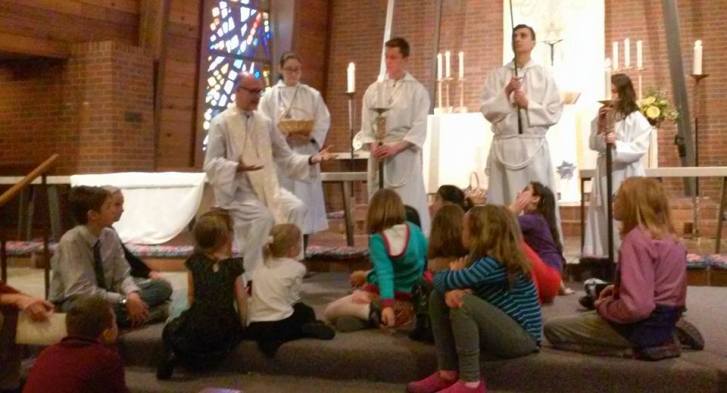 One of the things I really liked about the Lutheran Church is that the children are brought to the front of the church to participate in a “children’s sermon” with the pastor during every Sunday service.  It’s very cute and it gives the children some incentive to want to come to church and sit for over an hour on a hard pew listening to a guy in a black dress talk about concepts which are completely over their heads.
–
I can remember one of these children’s sermons like it happened yesterday:  Our Lutheran pastor was giving his Sunday children’s homily/sermon, and he asked the children this question:  “What is it that washes away our sins and gives us eternal life in heaven?”
–
Immediately twenty or so little voices eagerly screamed out:  The BLOOD of Jesus!!!
–
Now, every Christian who has ever gone to church knows that answer, but watching a bunch of bright-eyed, eager little four and five years olds screaming about the powers of someone’s blood just struck me funny that day.  “Creepy!” I thought to myself.  “Isn’t that kind of sick?  Isn’t it kind of sick to teach little children to be so excited about some other person’s spilt blood?”
Dear Christian pastor, evangelist, and Sunday School teacher:
–
The current consensus of New Testament scholars is that neither eyewitnesses nor the associates of eyewitnesses wrote the Gospels.  Not even renowned Christian, New Testament scholar NT Wright believes that we know who wrote the Gospels or that these books are eyewitness accounts.  Therefore, why should any modern, educated person believe the never heard of before or since central claim of Christianity:  That a first century corpse came back to life and later levitated into outer space where he sits, at this very moment, on a golden throne as King of the Cosmos???
–
If you say we should still believe this claim because of modern miracles, it has been widely demonstrated that alleged miracles occur in every religion, and, miracles (rare events) even happen to atheists!  So it is just as probable that these alleged “miracles” are rare, but natural events than that they are supernatural acts performed by a god or gods.  I can’t prove that they are all rare, natural events/coincidences but you cannot prove that any of them are actual supernatural events.
–
So we are back to the Resurrection.  But as I have shown above, the evidence for the Resurrection is weak.  We can’t even be sure we have eyewitness testimony in support of this alleged event.
–
What about fulfilled prophecies?  Well, if biblical prophecies were as accurate as Christians believe, we should find this fact mentioned in public university history text books.  But we don’t.  And why not?  Answer:  Because historians do not find the “prophecies” in the Bible to be any more accurate that the predictions of your neighborhood tarot card reader.
–
So we are back to the Resurrection…and the evidence for this alleged supernatural event is weak.
–
The evidence is in, dear Christians.  Probability tells us that the central claims of Christianity are most likely based on superstitions.  If such beliefs bring you personal comfort as an adult, that is fine.  But please don’t teach these bloody superstitions to children.  It is wrong.  It is immoral.
–
Gary