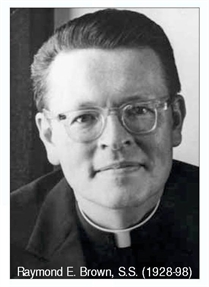 I am reading and reviewing another book on the Resurrection, written by a man who is considered one of the greatest New Testament scholars of our time, Raymond E Brown.   The title of the book (in two big volumes) is The Death of the Messiah (copyright, 1994).   In the Introduction, Brown states that the primary aim of the book is: to explain in detail what the evangelists intended and conveyed to their audiences by their narratives of the passion and death of Jesus.  Brown states he intends to do this by examining the four gospels in parallel rather than vertically, the historically preferred pattern of study.

Most scholars (liberal and conservative) consider Brown a moderate.  His views were considered compatible with the teachings of the Roman Catholic Church, an institution not known for a liberal bias under Pope John Paul II, the time period in which this book was written.

I’ve read another book by Brown, The Virginal Conception and the Bodily Resurrection of Jesus.  I found it refreshingly honest; devoid of an agenda; with no attempt to convert the reader to his point of view.  Raymond Brown (now deceased) was a Roman Catholic Christian who most definitely believed in the supernatural.  Therefore, the accusation by conservative Christian apologists that the majority of New Testament scholars are “liberal” and therefore biased against the supernatural cannot be used against the work of Raymond Brown.

Authorship of the Gospels:

No gospel identifies its author.  The common designations placed before the Gospels, e.g., “The Gospel according to Matthew” stem from the late 2d cent. and represent an educated estimate of the authorship by church scholars of that period who were putting together traditions and guesses pertinent to attribution.  To this a caution must be added:  The ancient concept of authorship was often less rigorous than our own, at times amounting to identifying only the authority behind a work (however distant) rather than the writer.

…Among the four, John manifests the most detailed knowledge of Palestine.

Jesus did not write an account of his passion; nor did anyone who had been present write an eyewitness account.  Available to us are four different accounts written some thirty to seventy years later in the Gospels of Mark, Matthew, Luke, and John, all of which were dependent on tradition that had come down from an intervening generation or generations.  That intervening preGospel tradition was not preserved even if at times we may be able to detect the broad lines of its content.  When we seek to reconstruct it or, even more adventurously, the actual situation of Jesus himself, we are speculating.  On the other hand, when we work on the level of the evangelists, we are on much more solid ground, for their accounts need not be reconstructed.

Dating of the Gospels:

The dating [of the Gospels] is approximate, but it is likely that all four Gospels were written in the last half of the 1st cent. AD.  The majority of scholars date Mark in the late 60’s before the destruction of the Jerusalem Temple, but the number of those who would date it shortly after 70 is increasing (Ernst, Gnilka, Pesch, Schmithals).  The dating of Luke-Acts is more disputed than the dating of Matt. but ca. 85 is the most often suggested date for both.  John is customarily assigned to the 90s, with final redaction in 100-110.  (Occasionally there is a revisionist attempt to move all the Gospels back much earlier, but none has been persuasive enough to gain much following in the scholarly world.)  There are also accounts in the “apocryphal gospels” such as Gospel of Peter (GPet) and The Gospel of Nicodemus (Acts of Pilate).  As will be maintained in the commentary (See APPENDIX I for GPet), these are later than the canonical Gospels and do not add a single historical fact to what we can know of the passion from the canonical Gospels.  They are important witnesses, however, to how the passion was perceived and narrated at a later period.

5 thoughts on “New Testament Scholar Raymond Brown: the Authorship and Dating of the Gospels”