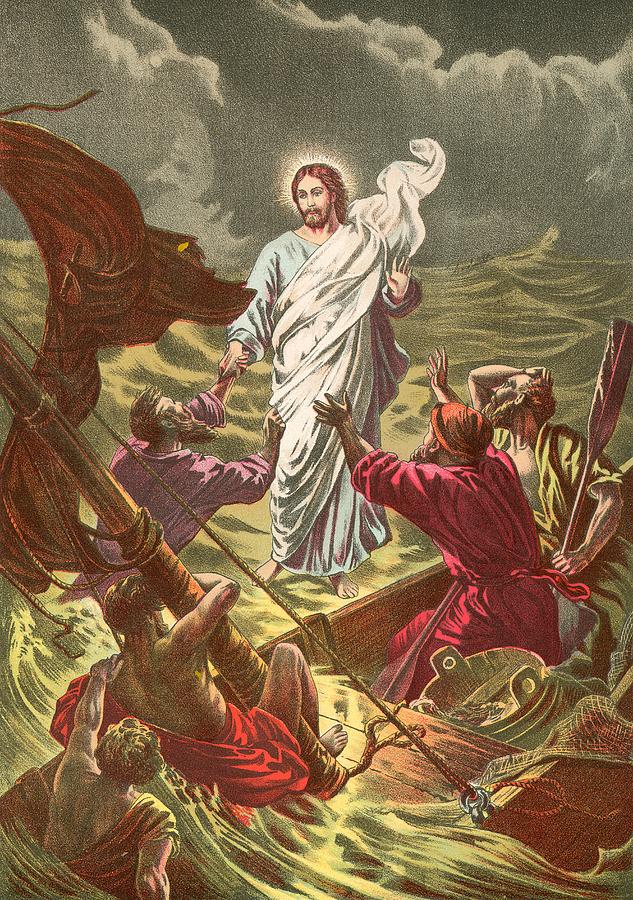 So what do we make of the fact that in the Story of Jesus Walking on Water in Mark, there is no mention of any of the disciples expressing any desire to take a walk on the water themselves, yet, in Matthew’s gospel, Peter jumps out of the boat and begins walking (on water!) to Jesus?

Can anyone say, “literary invention“?

“Matthew” should be given the nickname of “the teller of whoppers“.  Come on.  If Mark had a good miracle story, Matthew had to make it bigger and better for his book.  What a plagiarist!  What a concocter of tall tales!  And Christians wonder why so many of us non-Christians are skeptical about the historicity of many of the claims in the Gospels.

The Story of Jesus Walking on Water in the Gospel of Mark:

Immediately he made his disciples get into the boat and go on ahead to the other side, to Bethsaida, while he dismissed the crowd. 46 After saying farewell to them, he went up on the mountain to pray. 47 When evening came, the boat was out on the sea, and he was alone on the land. 48 When he saw that they were straining at the oars against an adverse wind, he came towards them early in the morning, walking on the sea. He intended to pass them by. 49 But when they saw him walking on the sea, they thought it was a ghost and cried out; 50 for they all saw him and were terrified. But immediately he spoke to them and said, “Take heart, it is I; do not be afraid.” 51 Then he got into the boat with them and the wind ceased. And they were utterly astounded, 52 for they did not understand about the loaves, but their hearts were hardened.

The Story of Jesus (and Peter)Walking on Water in the Gospel of Matthew:

Immediately he made the disciples get into the boat and go on ahead to the other side, while he dismissed the crowds. 23 And after he had dismissed the crowds, he went up the mountain by himself to pray. When evening came, he was there alone, 24 but by this time the boat, battered by the waves, was far from the land,[a] for the wind was against them. 25 And early in the morning he came walking toward them on the sea. 26 But when the disciples saw him walking on the sea, they were terrified, saying, “It is a ghost!” And they cried out in fear. 27 But immediately Jesus spoke to them and said, “Take heart, it is I; do not be afraid.” 28 Peter answered him, “Lord, if it is you, command me to come to you on the water.” 29 He said, “Come.” So Peter got out of the boat, started walking on the water, and came toward Jesus. 30 But when he noticed the strong wind,[b] he became frightened, and beginning to sink, he cried out, “Lord, save me!” 31 Jesus immediately reached out his hand and caught him, saying to him, “You of little faith, why did you doubt?” 32 When they got into the boat, the wind ceased. 33 And those in the boat worshiped him, saying, “Truly you are the Son of God.”

7 thoughts on “Why did the Author of Mark Omit Matthew’s Claim that Peter too Walked on Water?”