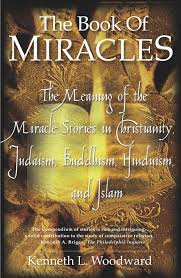 How many times have you heard a Christian say the following:  The reason that God no longer performs big, public miracles is because the age of public miracles ended with the Apostles.

How can any skeptic disprove such a claim???

I am currently reading Kenneth Woodward’s “The Book of Miracles” , a review and comparison of the miracle stories in the world’s five “great” religions:  Christianity, Islam, Judaism, Hinduism, and Buddhism.  Here is one stunning finding in my reading so far:

“In [Judaism, Christianity, and Islam], therefore, there is a time when God is present to the world in ways that later He is not.  And in each tradition, the withdrawal of the palpable presence of God is followed by the emergence of saints who are seen as the friends of God in ways that the rest of humankind is not.  Although the meaning of sainthood differs in each tradition, its function is much the same.  Saints witness to the continuing power of a God who otherwise often seems distant—if not absent—from the world.”   —p. 32

“Miracles gradually disappear as the [Hebrew] Bible moves from the first book to the last. In Genesis, only God works miracles.  When, in the book of Exodus, Moses is introduced, God begins to work miracles through the agency of Moses, aided by his brother Aaron.  Then, almost imperceptibly, control of miracles passes from God to His prophets.  Finally, God himself ceases to make appearances in the Biblical text, and eventually miracles cease as well.  There is another pattern in this pattern:  miracles become more personal.  From Moses to Elijah, miracles are performed by individuals (as God’s agents), but only before groups.    That is, they are public miracles.  With Elijah and Elisha, miracles are for the first time performed by individuals for individuals.  That is, miracles become increasingly private.”   p. 36

Gary:  Amazing.  This is exactly what we see in the Christian New Testament:  In the beginning, God (in the form of Jesus) performs many great, public miracles such as raising the dead Lazarus before a large crowd.  After Jesus’ death, the Twelve allegedly performed miracles but nothing on the scale and quantity of Jesus.  Finally, Paul is  portrayed as converting people to The Way based on his persuasive preaching, not by performing public miracles, except for the healing powers of the cloths he carried.  So in Christianity, miracles go from big, dramatic, and public…to personal healing handkerchiefs.

I haven’t studied Islam much, but Mr. Woodward describes a similar pattern in that religious tradition.

Isn’t it interesting, friends, that the closer one gets to the present time, the stories of miracles get less dramatic and less public?  Isn’t it, therefore, entirely possible that the reason for this change in the behavior of “God” is that making up facts about an alleged event in the ancient past is much easier than making a claim that can be fact checked with other historical records.

It’s all a tall tale, friends.

8 thoughts on “In all Five of the World’s Great Religions, the Gods Perform Fewer and Fewer Public Miracles as Time Progresses to the Present”