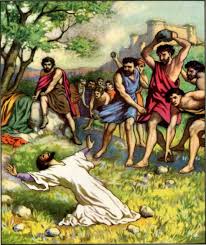 As I have demonstrated in previous posts, it seems like everyone and his uncle in first century Palestine was receiving messages from God in dreams, visions, trances, or by angelic appearances. And it is very clear that first century Jews took these dreams, visions, trances, and appearances very seriously. Joseph, the husband of Mary, for instance, has a dream in which an angel tells him to marry a woman who is pregnant by someone else. So he marries her! A couple years later, in another dream, an angel tells Joseph to move to a foreign country, in the middle of the night. And he does it!

And we just saw in my last post regarding Peter “seeing” a floating sheet full of non-kosher animals; unclean animals which God told him to kill and eat, that first century Jews were willing to abandon traditions that the Jewish people had observed for over a millennia, based on nothing more than a dream, vision, or trance. So the idea that all first century Jews needed hard evidence to accept a radically new teaching is contradicted by Peter’s “trance”. And the idea that first century Jews could distinguish a dream from reality is also called into question by Peter’s confusion over this “trance”. Was it a trance? Or was it a real experience, a “miracle”, performed by God? Peter wasn’t sure.

When they heard these things, they became enraged and ground their teeth at Stephen.[a] 55 But filled with the Holy Spirit, he gazed into heaven and saw the glory of God and Jesus standing at the right hand of God. 56 “Look,” he said, “I see the heavens opened and the Son of Man standing at the right hand of God!” 57 But they covered their ears, and with a loud shout all rushed together against him. 58 Then they dragged him out of the city and began to stone him; and the witnesses laid their coats at the feet of a young man named Saul. 59 While they were stoning Stephen, he prayed, “Lord Jesus, receive my spirit.” 60 Then he knelt down and cried out in a loud voice, “Lord, do not hold this sin against them.” When he had said this, he died.

There is zero indication in this passage that Stephen was asleep, dreaming, or in a trance. However, how do we know that this passage cannot be a statement of reality? Answer: Stephen claims to see Jesus standing at the right hand of God! This directly contradicts other passages of the Bible that specifically state that “no man has ever seen God”.

Even many Christians assume that this statement by Stephen was a vision. But no where in the passage does it state that this was a vision. This passage shows that first century Jews (at least a small group of them) could assume that a vision was reality, or, it demonstrates that the writers of the Gospels (the author of Acts was also the author of Luke) were willing to retell a vision without mentioning that it was a vision. They wrote the story of a vision using language as if it were reality.

All this demonstrates that it very possible that the early Christian belief in the Resurrection of Jesus was originally based on visions, vivid dreams, trances, or hallucinations. It also demonstrates that just because the Gospel author does not expressly state that the “appearance of Jesus” occurred in a vision or trance, that doesn’t mean it didn’t. Thirdly, it demonstrates that some first century Jews could be convinced simply by a vision, dream, or trance to believe radically new teachings that directly contradicted a millennia of Jewish teaching: such as eating non-Kosher foods and believing that a human being could see God.

What does all this evidence tell us, folks? It tells us that the early Christian belief in the resurrection of Jesus was most probably based on dreams, visions, trances, or hallucinations. And the evidence for this probability can be found in the Bible itself. Stop listening to the spin of Christian apologists who try make the obvious seem so much more complicated than it really is. You don’t need scholars to see the simple truth, folks. Use your brain and good ol’ common sense: This is a tall tale by ancient, gullible, superstitious people.